Shopping Cart
Your Cart is Empty
Quantity:
Subtotal
Taxes
Shipping
Total
There was an error with PayPalClick here to try again

Thank you for your business!You should be receiving an order confirmation from Paypal shortly.Exit Shopping Cart

Herkimer County Habitat for Humanity is partnering up with the Cornell University Cooperative Extension's Eat Smart New York program to offer nutritional education to at-risk populations in the Central New York and North Coutry Regions.  Watch for more news on events and educational opportuntities as they come available! 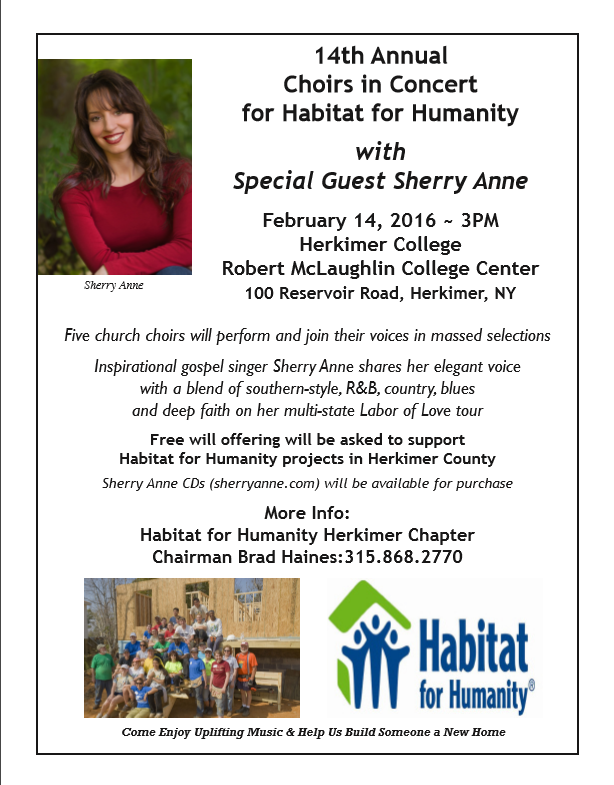 By By Donna Thompson

Team members and coaches removed bricks from the house in Ilion and cut brush and stacked it between the sidewalk and curb for pickup.

The bricks were from the chimney for the old furnace, according to Habitat President Patricia Miller. A new energy-efficient furnace was installed and the old chimney was no longer needed. While the chimney had been taken down, the bricks remained in rooms from basement to attic. The group set up an assembly line to remove the bricks and put them into a bin to be hauled away.

“That would have taken us all day,” a Habitat volunteer commented.

Coach P.J. Anadio received plenty of advice from his players when he used a saw to cut up some of the longer branches.

Team members completed their work by 10 a.m. Saturday before they had to head out to get ready for a game. (The Herkimer women scored an 8-1 victory over Mohawk Valley Community College in the first half of a doubleheader.)

Miller thanked team members for their help and introduced them to Stacey Crim, who is partnering with Habitat to rehabilitate the house where she and her 9-year-old twin sons, Anthony and Jonathon Spellman, will live when the work is complete.

The three-bedroom house will have a new roof and siding, windows, insulation, wiring and plumbing as part of the rehabilitation project, according to Frank Kucerak, construction coordinator.

He said the house is structurally sound and in good shape for a building that has been vacant for about six years.

Anyone interested in helping with the project can stop in on a Saturday morning — work starts about 8 a.m. — or contact Kucerak at 894-9216 or [email protected] for more information.

Habitat for Humanity is a worldwide ecumenical Christian housing ministry which seeks to provide simple, decent housing to low-income families who are willing to work with Habitat volunteers to build or renovate their own homes. Habitat homes are then sold to these partner families at no profit and the organization provides a zero interest mortgage. All income from mortgage payments is used to provide more low-cost houses.

To see the photo that accompanied this article, please go to:

The Christine Mergenthaler Memorial Award for Outstanding Service to the Community

The Friends of Herkimer County Habitat for Humanity have established the Christine Mergenthaler Memorial Award for Outstanding Service to the Community to be awarded through the Herkimer County College Foundation. Christine served as Herkimer County Habitat for Humanity President for the past 12 years and recently passed away. She used her musical talents, extensive knowledge and kind spirit to help others less fortunate and was an example to all who were fortunate enough to know her.

The scholarship will be awarded to a Herkimer County resident attending Herkimer County Community College in their second year and who have demonstrated significant community service.

Anyone wishing to donate to the scholarship can send donations to:

Herkimer County Habitat for Humanity has announced the election of Pat Miller as their new president.

Miller has been an active member of Habitat since the first meeting in 1998. She has been a board member since 1999, served as treasurer for many years and also served as finance committee chairwoman.

Miller has been the senior financial aid assistant for the past 15 years at Herkimer College, where she assists students and parents through the complex world of financial aid to help them pay for college.

“I look forward to working with our dedicated volunteers and board members and carrying out our mission of building simple, decent homes for families in need in the same spirit that Chris led our organization for the last 12 years,” said Miller.

The organization has recently selected a new partner family and is now on a quest to find a suitable house in the Herkimer, Mohawk or Ilion area to rehabilitate for the family.

Information on volunteering to help can be found at http://www.herkimercountyhabitat.com/ or on Facebook at Herkimer County Habitat for Humanity. 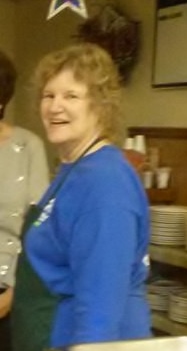 The members of the Herkimer County Habitat for Humanity Board are deeply saddened at the sudden passing of their president, Christine Merganthaler.
Christine served as president for 12 years while directing the affiliate in the building of several Habitat homes in the Mohawk Valley.  She was extremely dedicated to the mission and will be deeply missed as the Board works to start on its next house.
Our mission is to help families in need of housing to work in partnership with volunteers to build a simple, decent, affordable house. Once completed, the family purchases the house at no profit through an interest-free loan.
The Board invites anyone who has a heart for our missiong to join us or any of our several committees by calling 866-4909.  The committees are; Family Selection, Family Support, Site Selection, Fund Raising, Church Relations, Building and Office Support. 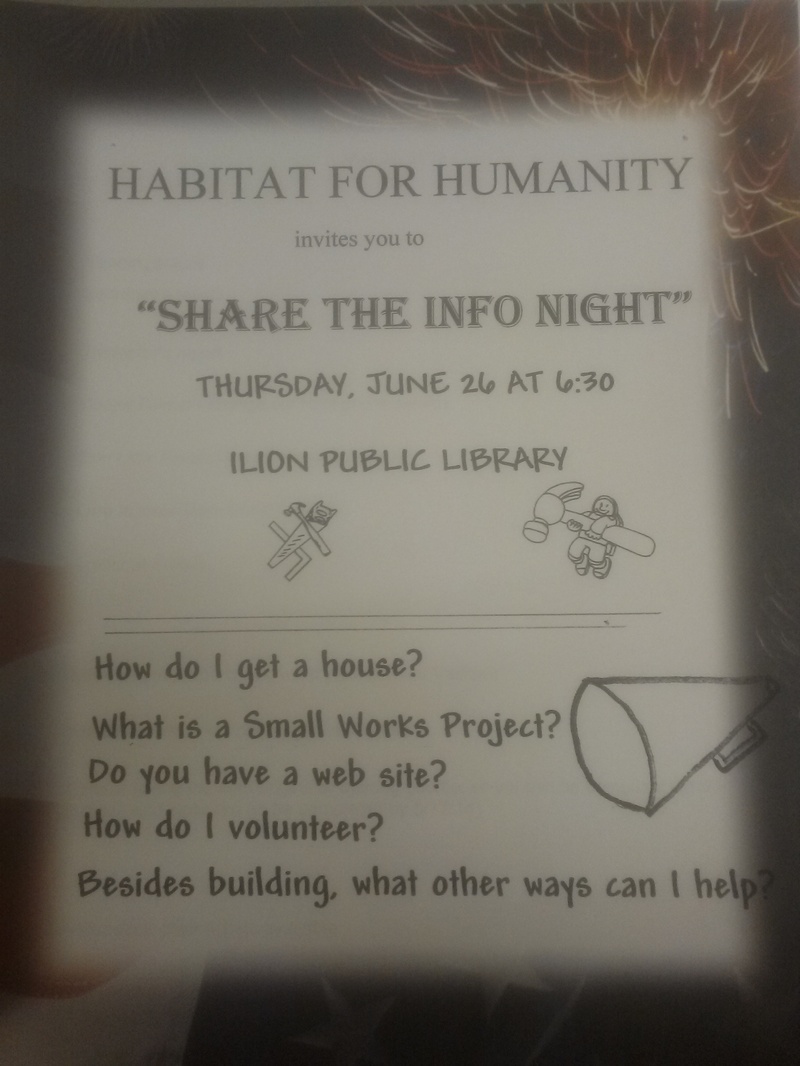 The Ilion LIttle Theater is once again running a special performance to raise money for Herkimer County Habitat for Humanity.

Hilarity ensues when a mild mannered CPA accidentally picks up the wrong briefcase - one filled with money! He tells his confused wife to leave everything behind, but before they can - the doorbell rings and the police show up as misunderstanding upon misunderstanding unfold. When a man with bullet holes in his head and Henry's suitcase shows up dead in the Thames, Henry's inept attempts to extricate himself from this impossible situation lead to increasingly hysterical situations. 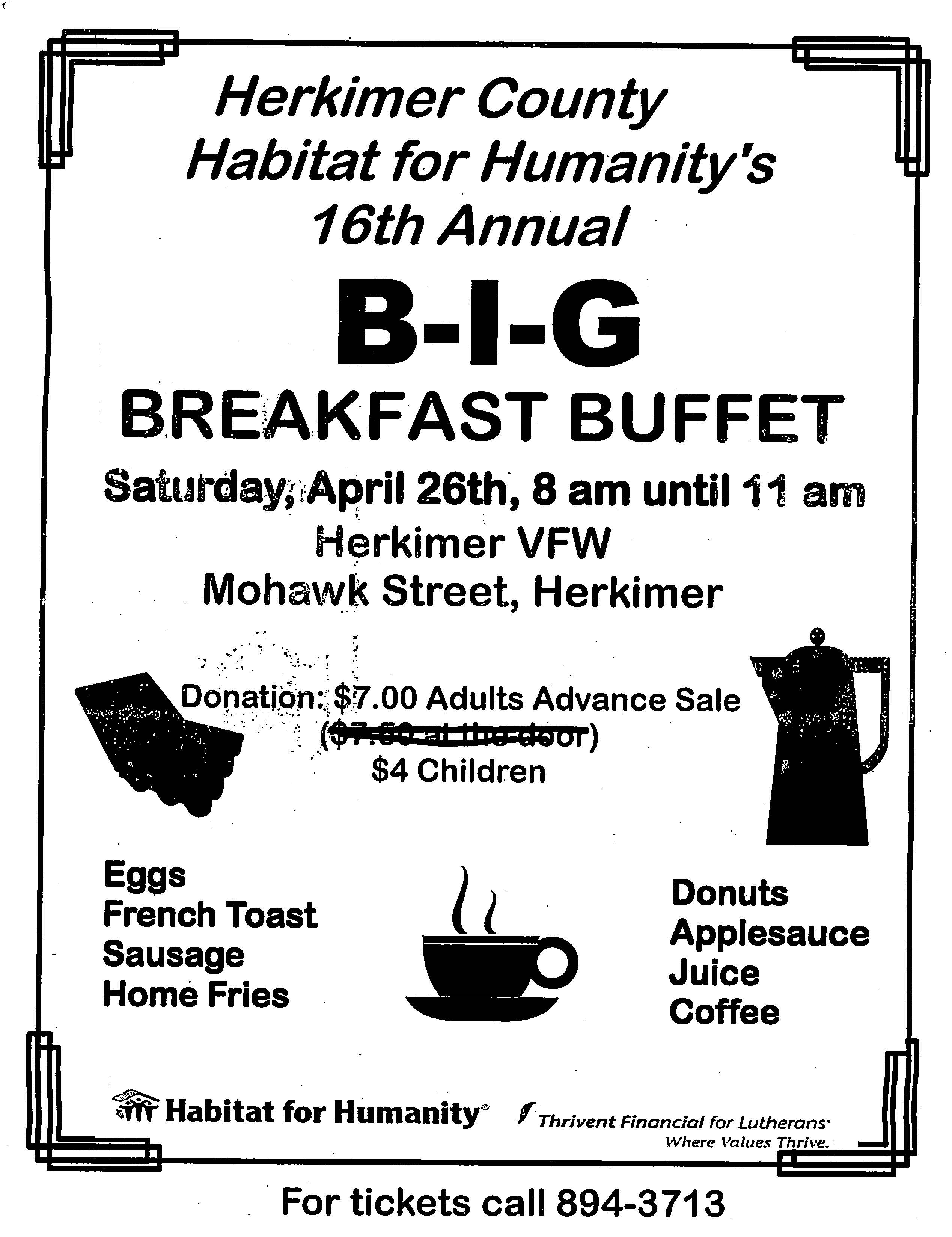 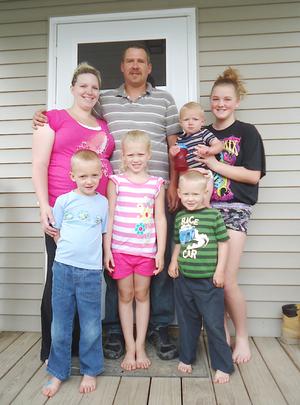 on Jerusalem Hill Road in the town of Litchfield Sunday afternoon.

The house has four bedrooms, one bathroom, a combination living room, dining room and kitchen and a

large basement, according to Frank Kucerak, of Habitat for Humanity, who served as construction

coordinator. The family, including Shawn and Angela St. Onge and their children, Colton, Hunter,

Shawn Paul, Isabella and Faythe, had been living in a trailer.

In addition to dedicating the home, Habitat recognized volunteers for the hours they put into the project

and individuals and businesses for their contributions. Herkimer County Habitat for Humanity President

Christine Mergenthaler presented a Bible to the St. Onge family. The Rev. Andrew Peloubet of the Ilion

Hall in Ilion. The next meeting is scheduled for June 25 at 7 p.m. All those interested are welcome to

Habitat for Humanity is an international Christian housing ministry which seeks to provide simple,

own homes. Habitat homes are then sold to these partner families at no profit and the organization

provides a zero-interest mortgage. All income from mortgage payments is used to build more low-cost